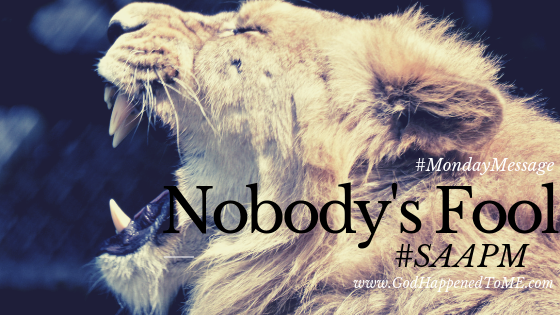 Today is April Fools’ Day and the start of Sexual Assault Awareness and Prevention Month. As should be clear by now, I am a sexual assault (specifically, rape) survivor and I have accepted my calling to be able to share my testimony on an international platform, in the faith that my story will save others. At this point of my life, I make no apologies for what I say with regards to how my truth comes out… I just pray that the hearers are in a place to receive and comprehend what I say. Over the last two years God has removed many layers from me and revealed many hidden truths within me, all in the divine plan to help others see Him through me. And I’ll be honest, it has been no easy task.

I picked the title for today’s message yesterday as I was driving to church. I wanted to do a play on April Fools’ Day, yes, but I also wanted to make sure that today’s message focused on one thing- educating people on sexual assault. So, if you are a person who hates the truth, feels too embarrassed by reality and statistics, or would just rather live in the dark- you may close this tab and continue to enjoy your day. And if you are a person who believes that a website with the name GOD in it should not be real and talk about sexual assault- God bless you and have a nice day. God didn’t bring me this far to sugarcoat things; my name is Michelle Early, not Willy Wonka. However, if you believe like I believe that it’s time for a change and that formerly hushed conversations need to be brought to the light, then dive in deeper with me. Communicate with me and help me save another person’s life.

Every 92 seconds, an American is sexually assaulted.

And every 9 minutes, that victim is a child. Meanwhile, only 5 out of every 1,000 perpetrators will end up in prison.

My story was different. My perpetrator was one of my older brothers. For two years I was raped by someone who came out of the same womb as I. He was my blood brother, not play brother or stepbrother. Blood brother. I was six years old when it started and eight when I finally found my voice to end it. When I finally told my mother, she immediately worked to have my brother arrested and a semblance of peace restored for me. Every 92 seconds, an American is sexually assaulted and in 1992, that American was me.

1 out of every 6 American women has been the victim of an attempted or completed rape in her lifetime (14.8% completed, 2.8% attempted).

That statistic is what RAINN says, yet as I look at the women around me, I see 1 out of 6 who have NOT been the victim. Yes, in my immediate circle of loved and cherished women, most have been the victim of attempted or completed rape. Rape is simply defined as non-consensual sex… so a person forcing themselves on another, even if consent existed at a prior time, is RAPE. I like to emphasize this piece because I have heard women say, “well, we did it before so even though I didn’t want to this time, it’s not rape.” Precious, yes it is. Consent for sexual activities is something that must be given/obtained every time, by both (or all) parties, and must continue throughout the entire sexual activity. That means that if you began with a yes but changed your mind mid-action, the NO trumps the YES and activities must cease.

So why am I sharing this on a Godly page?
Because Godly people get raped and sexually assaulted, too.

For far too long we have dismissed this conversation while allowing all Hades to break loose in people’s homes. It is the church’s responsibility to ensure the spiritual education and safety of its members. I wholly believe that it is imperative for people to know and believe that God is our refuge (He said it in Psalm 46) and that we must seek Him before, during, and after crises arise. This sometimes involves utilizing the resources available within your local church.

This is great news! And while I rejoice over this statistic, I keep two things in mind: 1. Not every assault or rape is reported and 2. This number still isn’t ZERO. I will never victim bash, say a person brought rape on themselves, or defend rapists, but I know that education and awareness make a BIG difference. Like we often say, “When you know better, you do better.” Well, here’s your knowledge for today!

In the age of the #MeToo movement, I implore people- men and women- to find their voice and courage and refuse to sit idly by as others experience pain. One of my favorite scriptures in the bible is Revelations 12:11 which is written below.

And they overcame him because of the blood of the Lamb and because of the word of their testimony, and they did not love their life even when faced with death.

Beloved, find your voice, find your courage, and save someone’s life… TUHDAY! I will not stop sharing my testimony until 0% of people are sexually assaulted/raped… or until God tells me to stop… whichever comes first. Until then, I will not be silenced and my flame will not be extinguished.

When I say that “it’s healing time” what I am also saying is that it is time to be set free from the bondage of silence. There is so much POWER in our testimony. God gave us this testimony, not to keep it to ourselves, but so that He could get the glory as other people are set free with our voices of victory and tears of triumph.

Speak, beloved, speak and walk in the freedom that God has naturally given you as heir to His throne (Read John 8:32).