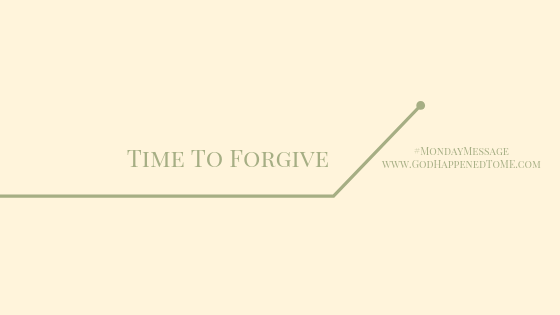 I want to begin by making the disclaimer that I know I’ve talked about forgiveness before. I know it is a topic that we tend to hear about often, but it is also a topic that we must continue to reiterate until we (writers/preachers/speakers included) can finally learn to forgive and seek the forgiveness of others. So, with that out of the way, let’s begin!

Yesterday I sat in church, fully engrossed in the service, and just thought of the recent decision that I had made. I quit a discipleship program that proudly boasts, “Queens don’t quit!” Yeah, well, this Queen did. I realized- albeit, too late in the game- that I had impure reasons for joining and that I forgot to factor in the multiple county-distance drive that I would have to take to attend the weekly class. Following the same logic that I followed when I chose my college, I decided to go and do whatever my best friend was doing. She was in this discipleship program so I reckoned I should be, too. Nevermind the fact that God told her to join that program, but He did not tell me… no, Michelle had to follow Amy. *SMH*

Fast forward to Thursday night when I finally listened to God and quit the class. I felt the greatest weight lifted off me, but I was suddenly flooded with the same question- “why?”

“Why are you quitting?”
“Why now? You’ve made it through 28 weeks, can’t you finish the last 14?”
“Why are you doing this? Do you realize how your decision will impact your classmates?”

To be honest (and a bit petty), that last one cracked me up. Let me say this, I spent the first 32 years of my life doing things to please other people. Even now I consider too much how my choices impact others. I consider others over me so often that my needs and desires go unmet. Yes, I thought about the impact of my leaving, but the effects of my staying would have been far worse.

So, I’m sitting in church yesterday and the executive pastor announces that he will be continuing in the sermon series that our senior pastor began entitled, “Get Out Yo’ Feelings”, adding that the day’s title would be, “Be Better, Not Bitter.”

Yeah; he went there. He sho’nuff did preach about forgiveness.
(Click here to watch our 8am service)

When he began, I was confident that I had apologized to all that I had wronged and that I was not harboring any bitterness towards others. Real talk, I think God laughed when I thought that because just as the thought popped into my head, He brought conversations and people to my memory and that’s when this message was birthed.

Despite my very true reasons listed above, God revealed that my heart had turned in the discipleship program because I felt like they had wronged me. Back in July and August when I was writing my initial sermon, I included a line for my program sisters- something that only they would understand- and no one showed up to support me. I honestly thought that I had dismissed those feelings because I am used to people hurting and disappointing me, but I realized during that sermon that not only had I carried that pain every day since September, but that I was also carrying a lot of other pain.

A good thing about having ADD and PTSD is that my memory is spotty. I forget a lot of things, as my mind tries to make room for new memories. However, what I did not realize was that as my mind made room for new memories, my heart never had time to deal with issues as they occurred. I was avoiding painful conversations by avoiding painful situations. Unless an offense brought about physical pain, I never told the offender how he/she hurt me. I swept situations under the rug and “moved on”, thinking that my silence was better for the both of us.

Have you ever done this? Have you ever dismissed real pain in your life for fear that a conversation about it would only make matters worse?

One of the scariest realizations that I faced was that the enemy had caused me to believe that my feelings were invalid and irrational. The great manipulator and trickster that he is, he led me to think that it was perfectly normally to be let down by those who claim to love and support me. He coated his lies with the simple statement, “your family has done worse.”

My family has done worse to me… but that does not mean that I need to accept hurt and disappointment from everyone in my life.

As I responded to a text from my sister (who was blaming me because the pastor had stepped on HER toes with his sermon), I remembered that I literally wrote a book (or two) about forgiveness. In the book, I mentioned that forgiveness is not for the other person, it is actually for you. I wrote those words, yet I had clearly forgotten one important part- “forgiveness is not forgetting, avoidance, or excusing.” – Rev. Dr. Keith Harris

As I’ve said in another post, my method to forgiving some people was forgetting that the offense happened… or forgetting that they exist. No messy confrontations, no big hoopla conversations with tears and drama. Just forget, avoid, and excuse. It was just easier that way.

By the time the sermon was over I realized that I had some people that I owed an apology… and my name was at the top of the list.

I needed to apologize to myself for never trusting myself, for never believing that my feelings were valid, and for never telling people when their actions had hurt me. In accepting that others had hurt me, I was able to see how I had hurt others. It’s like the floodgate on my thoughts and actions had been opened and now I could see where I needed to make amends.

Thank You, God, for opening the eyes of my heart.

Beloved, one thing that I have learned [the hard way] is that God will continue to send the same test/message to us until we pass/understand. For me, that message is forgiveness. So as He shares with me, I share with you, in the hopes that we both hear and understand what He is saying. Today, right this very minute, take out a sheet of paper. Fold it hotdog-style (long ways), write “who I need to forgive” on one side, and “who I must ask forgiveness from” on the other. Then spend the rest of the day praying over the names and situations on both side of the paper. When you are finished praying, wait for God to tell you how to proceed… and then do just as He says.

And speaking of forgiveness…

She’s seven years old and she gets it.
Do you?

It truly is time to forgive.
It’s healing time.
Be blessed.

One Reply to “Time to Forgive”