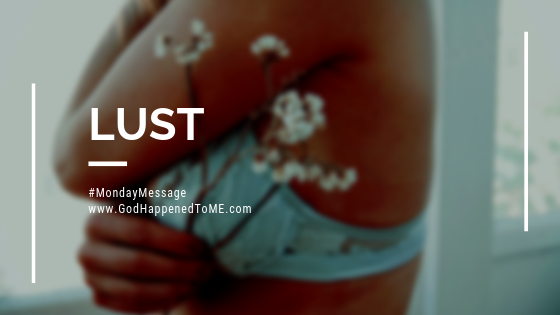 Four simple and unassuming letters, yet when brought together, they describe a feeling that consumed my heart and mind for so long.

A noun, meaning a very strong sexual desire.
Example: My lust for him made it impossible for me to concentrate at work.

A verb describing a very strong sexual desire.
Example: I lusted and longed for his touch.

Confession? Those were actual sentences that I either thought or said on Wednesday as I thought incessantly about a man.

He is a handsome man; unknowingly suave and charismatic. My city is super small so I met him but, of course, he knows every single person that I have met or encountered during my eight years of living in this town. But on Wednesday- which is a spiritually sacred day for me- I could not get him out of my head. I went to sleep Tuesday night to his texts and woke up on Wednesday morning repenting and asking for freedom from my thoughts. You see, while he is very attractive and the kind of man that I would have been drawn to in my past, even the kind of man that I would have indulged in “biblical behavior” with, I knew he was not mine. For far more reasons than I can openly share on here, he just ain’t The One.

If you recall my post Gracefully Broken, I mentioned that I felt the heartbeat of my husband and that God had allowed me to feel him on a spiritual level… even though I haven’t met him in person yet. Well, this particular guy ain’t the guy that God connected me to spiritually. This man, though sweet, compassionate, and passionate, was nothing more than a distraction. A mirage. An illusion of what I thought I wanted/needed, designed to occupy my mind and time and divert my attention and heart from what God had planned for me.

How many of yall know that not all distractions are undesirable? Some distractions are beyond attractive and appear that way so that we will, obviously, become too distracted to do what we are supposed to do. I can guarantee you that Eve found that fruit from the tree to be attractive and she presumed its deliciousness (Genesis 3:6), causing her to do what she knew she wasn’t supposed to do.

And this man, he was some delicious fruit…

If I’m being honest with you and myself, I felt this lust brewing for weeks but on this past Wednesday, it had reached its peak and I needed help. In my humanness I cannot tell you what happened. I cannot explain why I woke up with such intense desires to ask Christ to step in and intercede for me. I had had a dream and one of the ministers from my church was in it. When I woke up I knew that I needed to reach out to her to get her help with this lust that was consuming my heart. A few moments later, I felt another tug telling me to reach out to my mentor/accountability partner and seek her wisdom, too. Both women- one older and one younger- spoke the words that God had been trying to speak to my heart. What they revealed to me that day was only from God and confirmed what I already knew:

Right about now I can imagine that you, Mr. or Ms. Reader, are standing at a big fork in the road. Do you 1. Agree with what’s been said or 2. Wonder why I didn’t just follow along with Mr. Right Now? I’m going to be so honest with you, there are moments where I wonder why I didn’t follow along with him, too. His presence and *clears throat* manhood could satisfy many earthly needs right now. He and I would both know that it was just a fling, promising nothing more than awkwardness in a few weeks, but gratification right now. Our mutual flirtation would lead to mutual satisfaction and, as adults, we would be fine. This is, after all, what I did for so many years during and after college. I became so accustomed to one-night stands that this would be nothing more than a trip down memory lane for me, right?

Let me pause right here and tell you who is typing this post. This is not Minister Early, Auntie Michelle, Ms. Early/Ms. Michelle, M.Lisa, or any other title/name that I answer to. This is simply Michelle- a human being and just like you. This is Michelle who has been down that path too many times, completely aware of the fact that I cannot handle one-night stands emotionally (or physically, for that matter) and that option 2 would lead to guilt and further separation between me and my future husband. Giving into the desires of my flesh right now has never and will never help me. I know me, that stuff only leads to levels of unhappiness. And, to be honest, I am above and beyond that stuff right now. September 12th will mark three years of celibacy. Not religious celibacy and not even I-haven’t-had-opportunities celibacy. It is a celibacy that I entered because I could not handle the emotional implications that come from sex. The emotional implications that come from lust.

There goes that word again.

So there I was, lusting HEAVILY, after this man and God was working overtime to tame my heart and mind… and loins. I want to say that He was trying to stop me from engaging in foolish behavior that would distort my reputation in Frederick and my reputation as a minister. But the truth is, I think He- being the benevolent and loving God that He is- was trying to spare my heart. He knew that pursuing that path would send me right back into the emotionally dark place that He had already delivered me from… too many times to count.

I am human! The same urges and battles that you face, I face, too. The difference is, I am told that I need to keep that stuff a secret because you aren’t supposed to see my humanity. I’m supposed to sit high on some non-sinning, never-faulting pedestal, being admired and treated as glass.

Thankfully for you, I am rebellious. I believe in emotional vulnerability (thank you, Brene Brown!). I believe that I need to share so that you can see that your struggle is real and validated because others face them, too. I believe in 2 Corinthians 1:3-4 and Revelations 12:11. I share because, if nothing else, I need you to know that if our God can help me, He can help you, too.

Beloved, I could go on for DAYS about lust but I’m going to end here with the first scripture that popped up when my minister-friend/sister sent me a list of scriptures on Wednesday: 1 Corinthians 10:13. I repeated this scripture- aloud and silently- throughout the day, reminding myself that no temptation was greater than my great God.